Solitaire one of the most wanted and played games on the Windows platform for years. When Microsoft decided some time ago to remove it preinstalled from Windows many questions came up on how to get it again. They since introduced it again as a Windows Store App. BVS Solitaire Collection is the same as the one Microsoft published in means of the game, but it includes way more games and way more features. Let´s check them out. 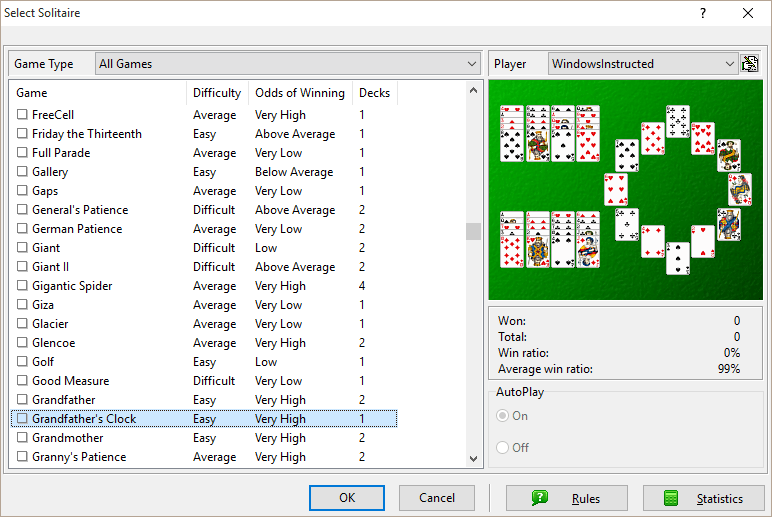 Next to all those games you can also just make your own rules in the games and create your own game! You can also completely customize the appearance of every single game, you can add your own backgrounds to the games and if you want you can even download more card packs to make the cards look different then the default cards. If you want the game can even randomize the card backgrounds, the card design or the background of the table at the start of each game. This way no game will look like the previous (until you had all combinations).

The games also includes an option to automatically show you the next move you can make, and if your out of moves BVS Solitaire Collection will simply tell you instead of making you search for a solution.

BVS Solitaire Collection also does other things you would expect from it, such as tracking your statistics, save game position so you can continue at any time, multiple player selection so each member of your family has it own tracked stats instead of one shared account.

The game includes everything you would expect from a Solitaire game and with it’s huge amount of features, game modes, styling options and customization we score BVS Solitaire Collection a 10 out of 10. In my eyes there is simply nothing to improve.

As you can understand we did not have the time to test all 476 different solitaire variations in this review. So we took a look at the most played game and one game we did not hear about earlier. FreeCell and King’s Secrets. Let’s begin by saying the installation was a piece of cake. Once you start BVS Solitaire Collection you can choose by the menu all games available to play. To begin the gaming experience test I decided to pick FreeCell first.

FreeCell is game in where you need to make 4 sets of ACE to KING’s. You do this by dragging the cards on top of each other. As you would expect BVS Solitaire Collection supports input by mouse but also works great on my Microsoft Surface 3. Which is a good thing, games not supporting touchscreens and especially card games are just obsolete to be honest.

The game includes a full library of all the rules for every single solitaire game in it. Which makes it easy for the user to learn how each game should be played. This is a great addition and the developer shouldn’t have left it out. A very good decision by the developers.

The games run smooth, it’s easy to play since you can enable options like “Autoplay” that automatically handles sets of cards and if necessary move them for you. If you want to play a bit more advanced than you can simply disable it by clicking on the button “Autoplay”.

On design the game scores a 8.5 out of 10. Everything looks smooth, but some 3d and more 2015 styling could be applied, some things look a bit “old” but that is not a huge deal. On gameplay we would score a 9.5 out of 10. The game includes every single option any other solitaire game does and some more. The gameplay is great and simply works perfect. Some minor improvements would be that the game tells you what you do wrong when you place a card on an invalid location. If that was included then a 10 was in place.

BVS Solitaire Collection is a very good option for anyone interested in the solitaire games. The games are graphically good looking and the gameplay is great. We score it a 9 out of 10 making it a very good product to consider. It doesn’t come free but still 19.95 USD for 476 different sorts of Solitaire is a good deal.

Business operations can be complex and time-consuming, but with the help of a strong IT…

If you own a business, you understand the importance of selecting the right point-of-sale (POS)…