Making backups of your system is one of the most important things to do when you have important work on your computer, everyone knows that. However, we all know as well that making backups can be a pain, it takes time, and you never use the backup so you simply don’t make them. Most of us think about making backups but then when things do go bad we remember we never did and that’s all because, like I said above, that making backups can be a pain in the …. EaseUS however brings us a solution, they call it Todo Backup Home. A backup program designed for home users which should make your overall backup experience easier and faster, but does it? We are going to review EaseUS Todo backup and tell you in great detail how it does and if it meets the goals of being a good backup solution for you.

Backup software in our eyes have to meet a certain criterium before they can call themselves a backup solution. They should be at least capable of; making a complete drive backup, making a system backup, making a partition backup and restoring the backups it makes. These feature sounds logical and you think why do you even bother telling us, believe me we’ve seen backup solutions that don’t offer those features. We can however say that EaseUS Todo does have these features and many more. We are going to take a look at the 3 most important features and how they work.

Something not in our list of absolute requirements for a backup solution is Mail Backup. However, Todo Backup has a feature called mail backup! Mail backup allows you to back up your mail from different programs, you can choose to back up your mail from Microsoft Outlook 2016, 2013, 2010 and 2007 and you can even backup your mails in Microsoft Outlook Express! Especially for people with an outlook filled with important mails like people who run an office at home or families with sent each other pictures this feature can be quite nice to have. You can also use EaseUs Todo Backup to restore backups you made from Microsoft Outlook and Outlook Express. We’ve tried this feature and the backup was identical to the state of outlook before we intentionally let it crashed and restore with Todo backup

Todo Backup has a feature called Smart Backup, what is it? What does it do? Was the first questions that came up into my mind, so I clicked it and let it tell me what it did. The feature is quite ingenious: “Smart backup can monitor changes of selected files and perform automatic backup after started. You can recover files to a earlier version as early as two weeks before” it’s a bit like Windows File History. Todo Backup Smart Backups is a bit like a guardian of your computer, it monitors all the folders you have selected to be protected and keeps a file history of all the files in those folders. If you accidently remove a file and you can’t recover it from your Recycle bin anymore then Smart Backup can save your file, better said you can even choose which version you would like to recover. Personally I really love this, and I have it enabled as we speak on my own system you never know when it can come in handy.

System backup is quite self-explanatory, it backups your entire system drive and all other drives in your system to one backup file, quite handy if you want to reinstall your system and have a huge external hard disk to spare. However, in any other case a file backup is better, still it’s good that Todo backup has the option to make a full system backup.

The name is just like System backup quite self-explanatory and in my eyes this is one of the features, or perhaps mail backup, you will be going to use the most. It allows you to make a selective backup of certain folders on your drive. Like my documents, my photo’s, your downloads and so on. This is in my eyes one of the most important features a backup solution should has, and Todo Backup of course has it!

Want to copy your entire partition to another computer? Then a partition backup is the best thing you could choose in Todo Backup. It makes an exact copy of the hard disk and gives you the possibility to restore that copy to another computer, or in case of a disaster to your own computer. A good choice if you want to be entirely sure that your files and programs are there when you recover. In theory you could use this to make a copy of your disk and use the disk as your primary disk and you won’t even notice it’s a copy.

And so much more….

There doesn’t seem to come an end to all the features that are built-into the program. You also have these settings available when you make a backup:

Next to all those options the backup solution also comes packed with some additional tools, some of which are weird to see in a backup solution but let’s be honest, you can never get enough tools for your money.

I can be simple about this, in terms of features for a home backup solution the program scores a 10 out of 10. There is nothing left that could be added that would in my eyes really improve the backup tool. It has everything and even more than you will ever need as a normal consumer.

EaseUS Todo Backup looks good, it has a modern look and everything is quite easy to find. I do however personally miss the fact that help is hidden behind some small question marks and that some options like encryption and such are hidden behind a button. In my opinion they could show some of the additional options in the main backup window. Especially settings like compression and encryption is what many people would love to set before starting the backup and it seems a little bit hidden now. It’s not a huge problem but just a little thing they could improve.

Below are some good impression of how EaseUS Todo Backup looked at the moment of reviewing. 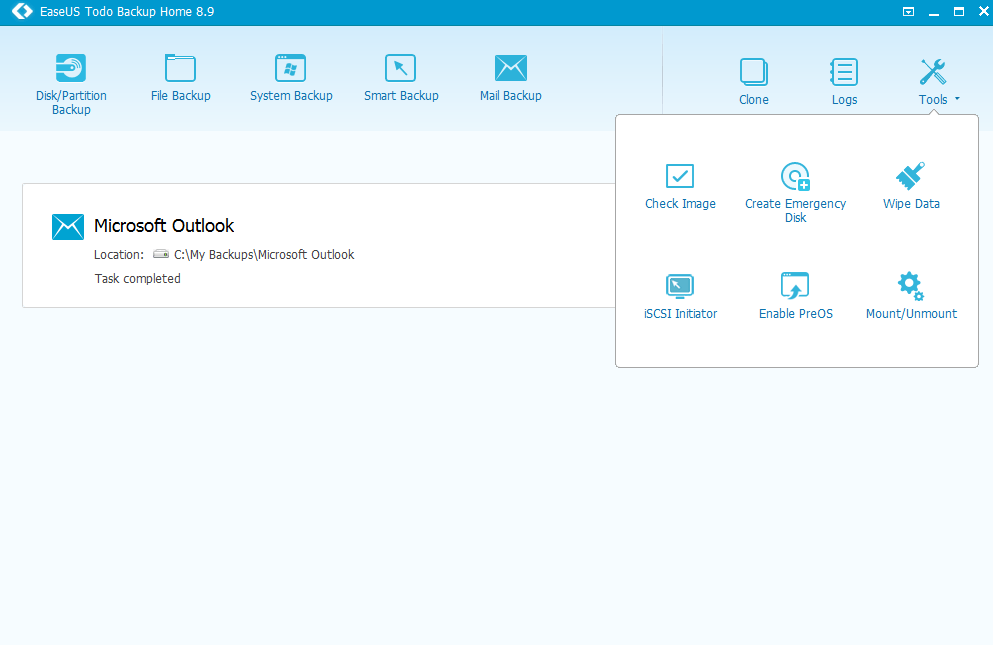 EaseUS Todo Backup does look clean, crisp and everything is easy to read so the design choices are smart. Tools included in the program, but what are not intended for creating backups are nicely hidden away in a small pop-up down menu. The design therefor scores a 9 out of 10, really do think they could show the advanced options like I said before a bit better.

Making backups should be as easy as possible, like I said before if it takes too long or is to complex to do people will simply not put the time into making them. I believe that making backups with EaseUS Todo is an easy thing to do and it will only take a couple of seconds (Of course creating the backup it self takes longer but that can be done in the background). The features that are built-in are designed so that minimal input from the user is required and there are no hard to understand technical words being used throughout the program which is a good thing.

However I did miss an introduction to the program like a video tutorial, or a guide through the program, that could really set it apart from all other applications out there and I think EaseUS should consider adding that to the program.

Overall the program is easy to use, fast and reliable and therefor I would score the Ease of Use a 9.5 out of 10, would it have included an introduction tutorials or something like that it would have been a 10.

EaseUS Todo Backup is a very good solution for everybody who is looking for an easy and fast way of making backups with the possibility of encrypting the backups. Next to that EaseUS Todo backup comes packed with many tools you might want to use. EaseUS Todo also offers you a recovery solutions which can be burned on a disc or put on a removable device giving you the possibility to even restore backups when Windows doesn’t even boot anymore. Overall Todo backup scores a 9.5 out of 10 making it an excellent piece of software and a very good choice as a backup solution.

Disclaimer: EaseUS sponsored WindowsInstructed to write this post. However EaseUS did not have any input into the review and the scores and opinions are those of WindowsInstructed. No matter what we are offered we will always write our own honest opinion.

Business operations can be complex and time-consuming, but with the help of a strong IT…

If you own a business, you understand the importance of selecting the right point-of-sale (POS)…